Meatballs at restaurant Sturehof, promenade around beautiful park the Royal Djurgarden, island hopping in Stockholm’s archipelago and the city’s best summer terraces; these are just some of the best reasons to visit Sweden’s multifaceted capital.

Sturehof is one of  the most popular and classic food restaurants in Stockholm serving especially exquisite seafood. However, many true Stockholmers know that the restaurant also offers arguably the best meatballs in town, the same meatballs that you will find at every Ikea store restaurant worldwide. But you should try them here, at their place of origin, where they are served with homemade mashed potatoes and lingonberry jam as is the Swedish tradition. Simply superb. 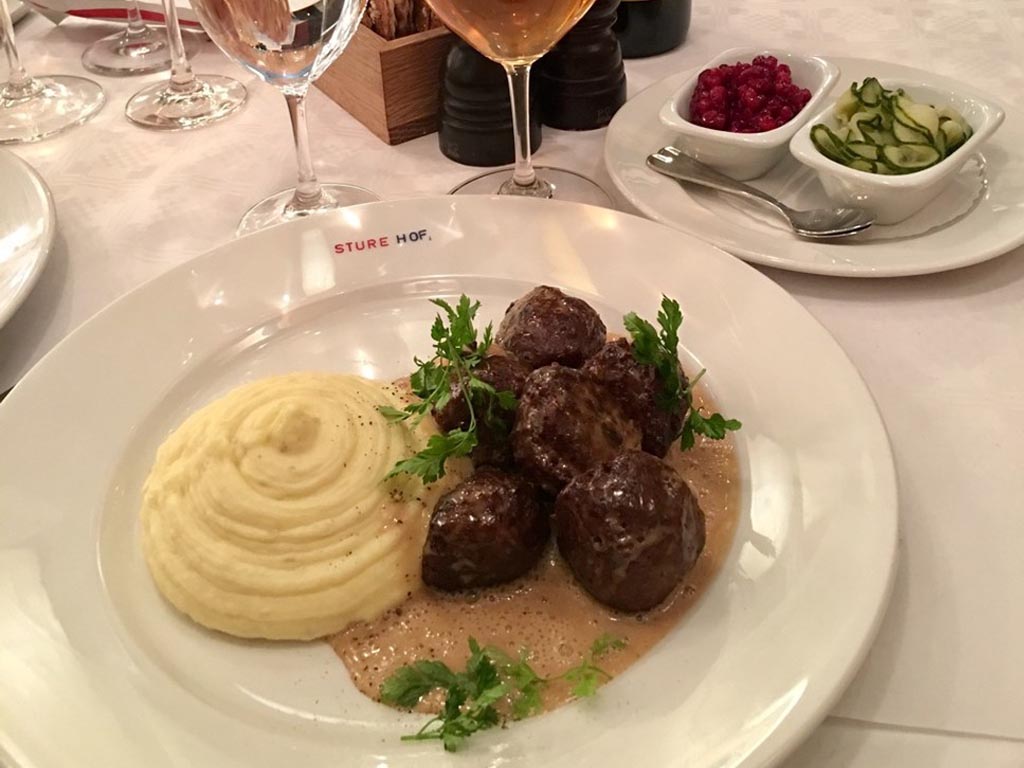 Promenade around the Royal Djurgarden

Enjoy a walk on a dedicated walking path that takes you all around Djurgarden where you will pass major  attractions such as Skansen, Vasa Museum, Nordic Museum, Gronalund amusement park, the Royal Yacht Club, ABBA The Museum and several of the best seafront restaurants in Stockholm. This walk will take you approximately two hours and will show you the most beautiful part of the city if not the country. Note: Benny Andersson from ABBA has a house here. 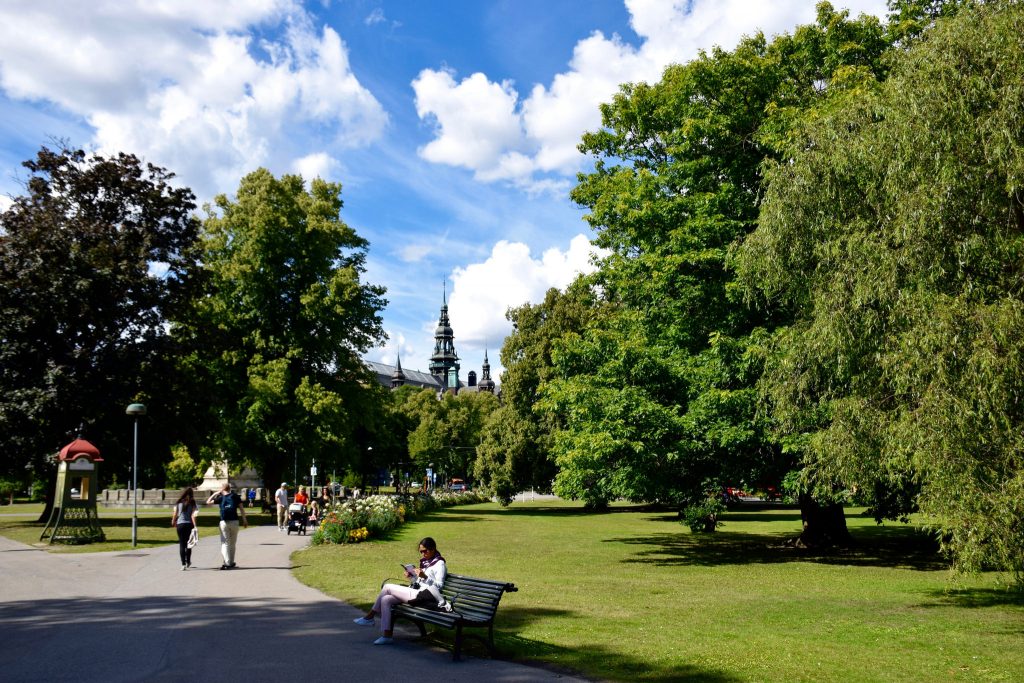 The Vasa Museum is a maritime museum located on the island of Djurgården that displays a unique and almost fully preserved 17th century ship called Vasa which sank on her maiden voyage in 1628. The Vasa was salvaged in 1961 and has been slowly, deliberately and painstakingly restored to a state approaching its original glory. There are ten different exhibitions around the ship to tell about life on board. 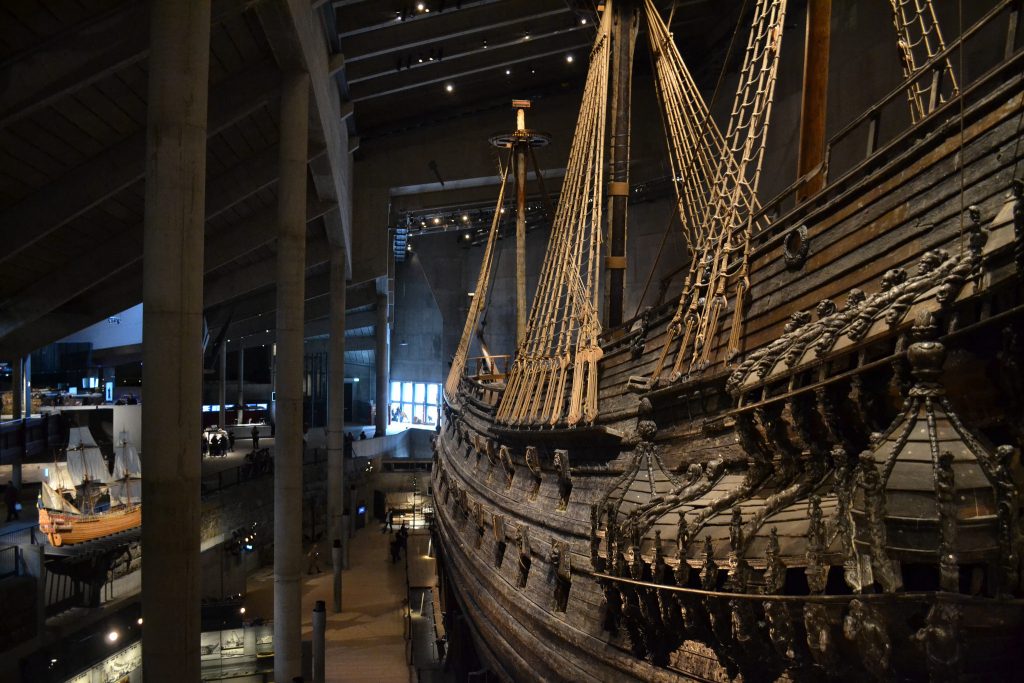 Stockholm’s archipelago is the largest in Sweden, and the second-largest in the Baltic Sea with approximately 30,000 islands and islets. You can visit the islands all year round, but during winter period the routes depend on the ice conditions. Several boating companies have regular routes, such as Waxholmsbolaget. Taxi boats are also available. In summer many people cruise the archipelago waters with private boats and picnic on the islands. 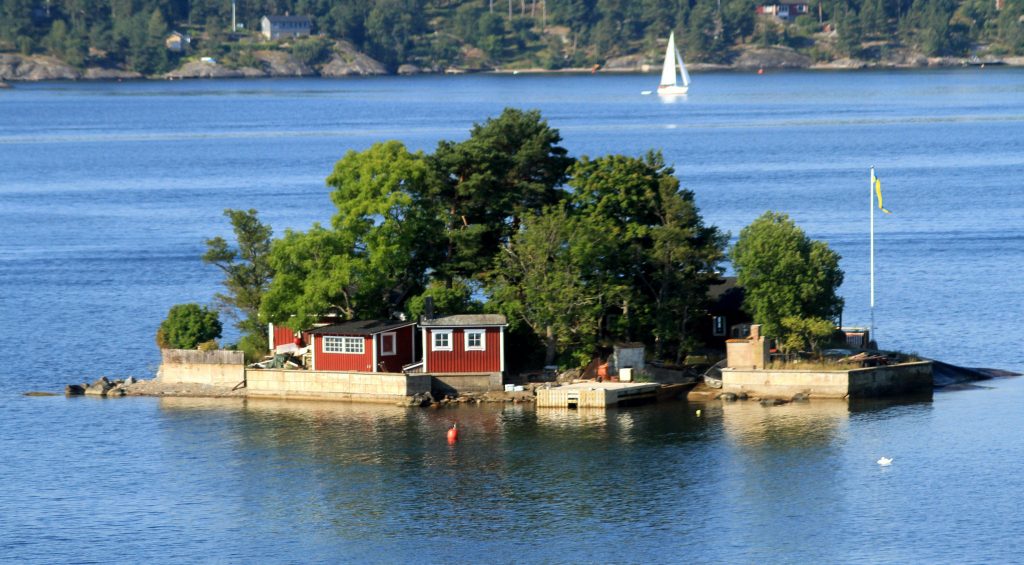 At the top of an old and disused elevator called Katarina Hissen sits Stockholm’s best known restaurant for amazing views. This restaurant, perched high above the entrance to the city’s port between south Stockholm and the Old Town (Gamla Stan), is all windows offering 360 degree views all the way out to the archipelago. Watch all the cruiseships, yachts and ferries come and go, particularly during sunset as the passing ships turn on their lights, making for an enchanting vista. One of the most celebrated chefs in Stockholm, Erik Lallerstedt, is in charge here and his menu features some excellent dishes, such as:  Bleak roe from Kalix, toast, red onion, creme fraiche and lemon, Grilled hake from Barents sea, grilled octopus, spinach sauté, kohlrabi and shellfish mayonnaise and Elderflower and lemon crème caramel with strawberry and almond tarte. 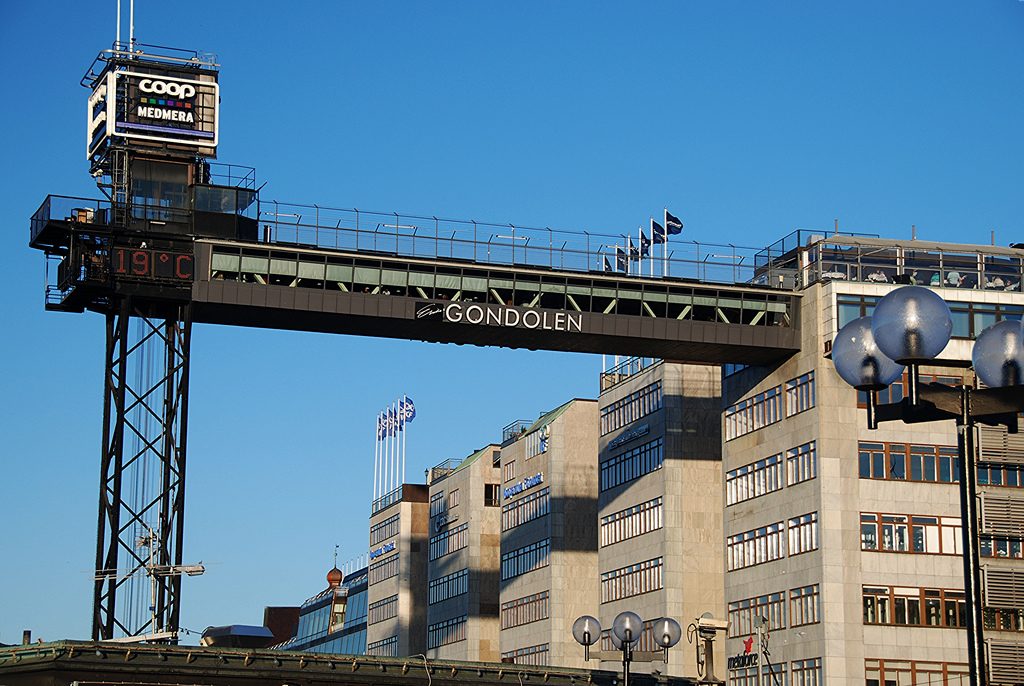 Skansen was founded in 1891 and is the world’s oldest open-air museum, portraying the entire country’s history from the past five centuries, with brilliant realism, including histori­cal buildings and peop­le dressed in period-clothing.  Traditional Swedish rural culture has been brought to life by exhibiting furnished houses and farmsteads, cultivated plots and gardens and both domestic and wild animals such as bears, wolves and lynx. You can enjoy a delicious and of course typically Swedish meal in one of the restaurants with breathtaking views of Stockholm. 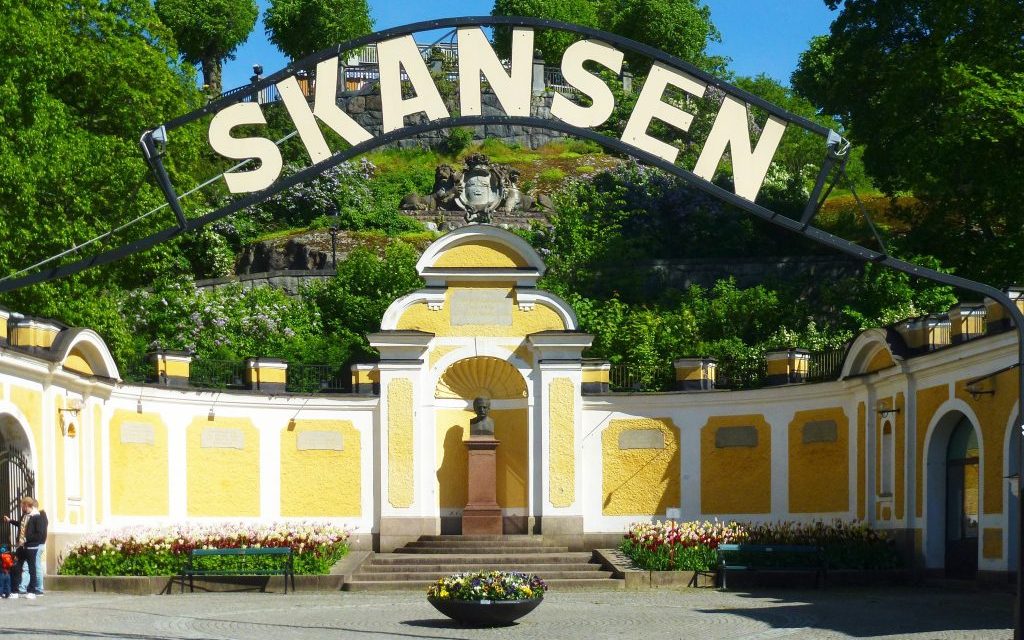 A Boat Trip to Drottningholm

Take the boat out to beautiful Drottningholm Palace, magnificent residence of the Swedish Royal family and one of the largest palaces in the world with over 600 rooms, dating back to the late 16th century. Visit the Royal Armory and wander the gardens and park areas surrounding the castle and its buildings. The historic ships S/S Stockholm and M/S Prins Carl Philip will take you on a magnificent cruise through the inner archipelago to Drottningholm. You can combine your cruise with lunch or dinner. Regular boat services in summertime depart from Stadshuskajen (the City Hall Quay) to Drottningholm. 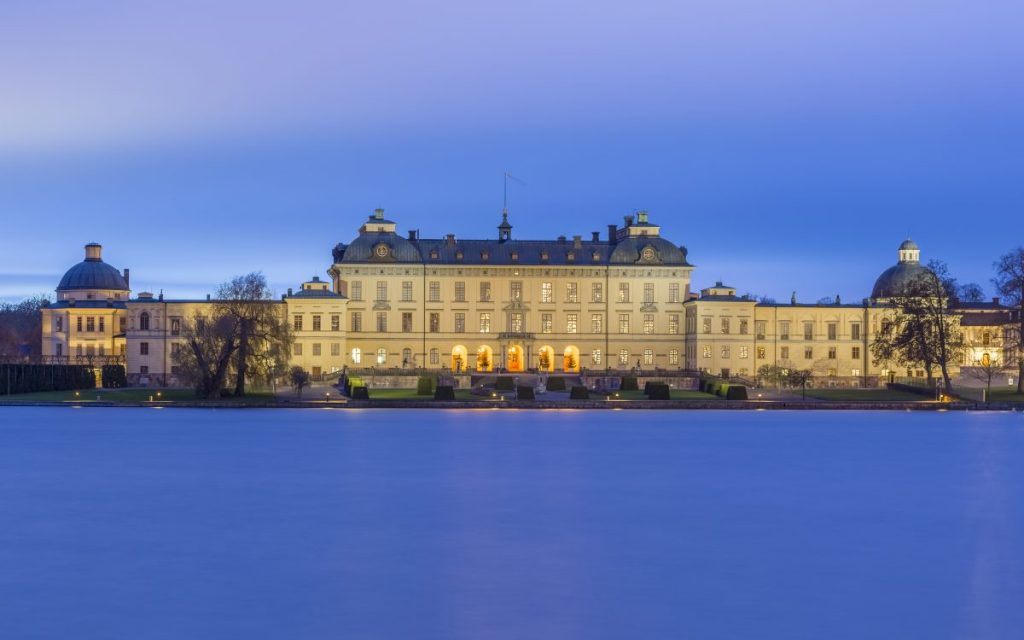 Gamla Stan is the area of the old town of Stockholm on the island Stadsholmen, dating back to the 13th century with cobblestone streets, historic architecture, and a scenic square in the centre surrounded by old merchants’ houses. This is one of the largest and best preserved medieval city centers in Europe and Stockholm’s most unique attraction. Here you find some of the city’s best restaurants and cafés, as well as small curiosity, antique and handicraft shops, the Royal Palace, Stockholm Cathedral and the Nobel Museum. Look out for the traditional daily changing of the guard. 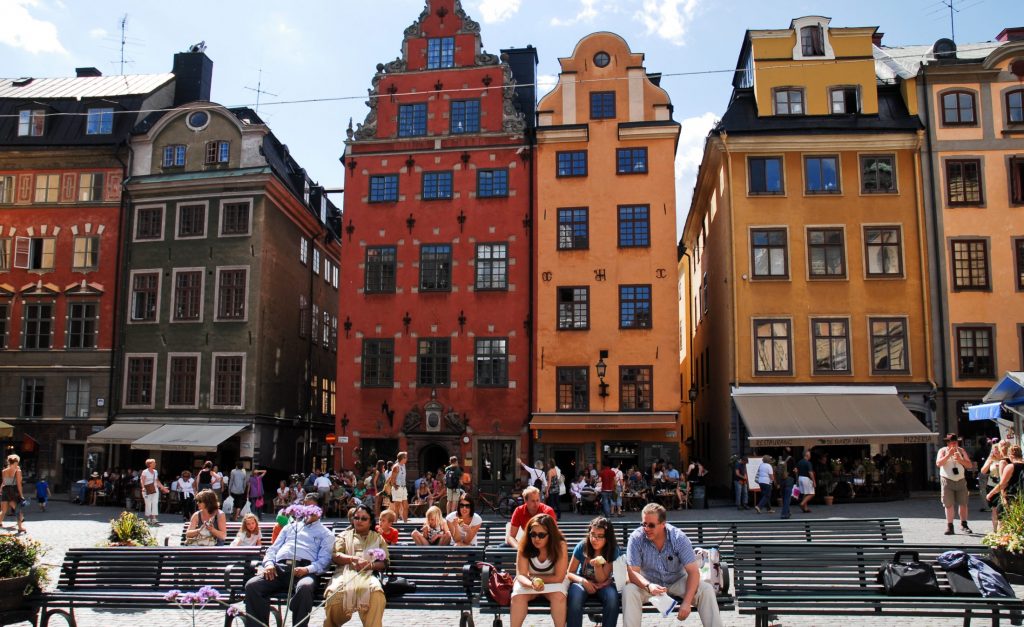 Stureplan is Stockholm’s most upmarket square with high-end designer boutiques, great restaurants, banks and other financial institutions, and some exclusive bars and nightclubs. To enjoy an evening out at Stureplan like the upper-class youngsters, celebrities, business people and even the young royals do, try the fantastic variety of  restaurant bars that are open late. If you are out on a warm summer night note that almost every place has its own terrace. For those who want to continue into the early morning hours it might be convenient to choose one of several trendy and stylish hotels also located on Stureplan.
Restaurants: Sturehof, East
Bars and clubs: Sturecompagniet, Laroy, Spy Bar and V Club stureplansgruppen.se
Hotels: Scandic Anglais, Story Hotel