The best place in many restaurants is actually the bar and that is certainly the case with Brasserie Astoria in Stockholm where a large open kitchen and surrounding chairs give you a first row experience on how a well organised team of modern top-chefs works, no confidentiality needed.

When world renowned Swedish top chef Bjorn Frantzén announced  that he would open a brasserie in Stockholm which would be the kind of place he’d like to go to after work, I got very excited.

The next time I found myself in Stockholm and walked into the new restaurant, I got both stunned and disappointed, what happened to that cosy little joint where chefs and waitresses share their after-work beer and a cigarette?

Well, I should have understood that if any star glazed chef takes on a new restaurant concept, it will be done with a rigorous business plan and an army of designers and architects loaded with all needed ammunition to create something fantastical. This restaurant is grand, an old cinema from the early nineties and half of the neighbouring block has been converted into an culinary amusement park with hundreds of seats placed on several different floors mixed with multiple bar areas. 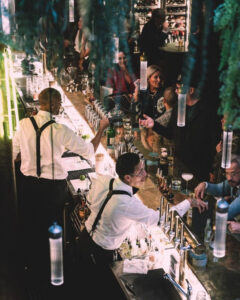 With no reservation I was taken to the bar surrounding the open kitchen and I was met by nodding chefs and a sense of calm, an inviting warm feeling and smell of all kinds of goodness. If it is true that the kitchen is the heart of every home, its social hub of sustenance, then here is Astoria’s own convivial and culinary beating heart.

When I explained that I lived in France for 25 years I was recommended the snails to start with, interesting proposal I thought, would I leave Paris for snails in Stockholm? But here you start to discover an alternative Brasserie experience, the snails don’t come slowly creeping with a week long garlic odour, instead they come with a fresh scent of lavender and thyme that makes you think Provence, not Paris.

The menu tells a story written by an international chef, the classic pounded veal has now been topped with grilled asparagus, haricots verts, shiitake, cilantro, deep fried onion, fresh sprouts and a dressing made with kosho and lime. 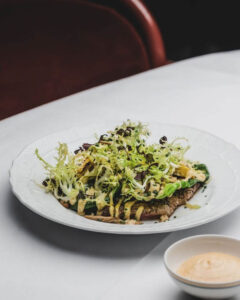 The wine list makes you think about Tour d’Argent and prices vary between 65-5500€, so watch out if you are here to impress!

On the far end of the open kitchen the final part of your dinner is made and here we find everything from french macarons to spicy pepper meringues. The menu varies from week to week and there is always something new and seasonal to discover even for regular visitors, I have since learned.

When the coffee is finished you can either leave and offer your seat to new hungry guests, or if you are up for another glass you can move on to one of several bar areas where music is played and the social Stockholm’s elite hangs out. It’s surely the capital’s hotspot right now both for eating and mingling. 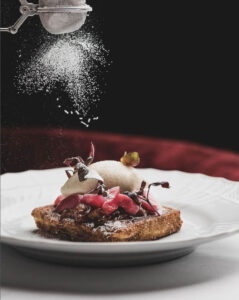 It feels good to be wrong sometimes. With a bit of a prejudices mind I was hoping for something else and then, like any great artist, Astoria surprises you with its take on a modern Brasserie, creative classic dishes, amazing and comprehensive international wine list and a crew that takes their time to assist and comfort you with personal service even though the place is constantly fully booked.

Brasserie Astoria is located in the centre of Stockholm within walking distance to many of the most popular hotels and shopping areas.

Open for lunch, dinner and well in to the night ..

Located in the classic former theatre Astoria on Nybrogatan, Östermalm in Stockholm, this restaurant is a project by The Frantzén Group with famous restaurateur Björn Frantzén.

The theatre’s history and former glory as a large luxury cinema since 1928 seeps through the walls of this elegant brasserie.

Big on class and comfort, with a large dining room and extensive bar areas that serves creative cocktails and well-chosen wines, this brasserie is a delightful meeting and relaxation place for discerning customers.

More from the menu..