The Spanish Jamón Ibérico de Bellota, is a gastronomic delicacy that can easily be described as the finest ham in the world.

Spanish Jamón Ibérico, or Iberian ham, is a cured ham of the highest quality made from black Iberian pigs, therefore also referred to as pata negra (black hoof).

There is a marked difference between Spanish Serrano ham from a traditional white pig and the much more delicate and flavourful Iberian ham from the black pig. The Ibérico pigs are the original wild swine of Spain, first immortalised on cave-walls by cavemen and thereafter tamed over the centuries. They are big, with slender legs and a very long snout, all black with very little hair and their often mentioned black hooves – hence the reference ‘pata negra’, which also describes the Iberian ham and distinguishes it from a Serrano ham. The black pig is fatter than the white, with veins of fat running through its muscle and a large amount of fat layering each ham, allowing the Iberian hams to be cured much longer, resulting in a much more complex, intense and sweet aroma and taste. 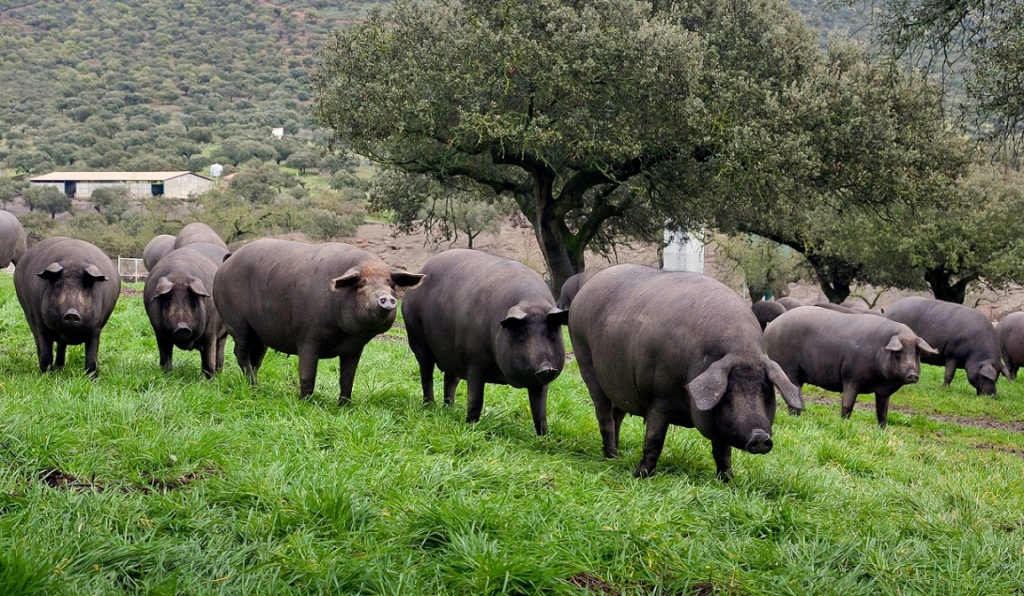 Ibérico pigs really love acorns. Each pig can eat ten kilos of acorns a day. Note well the difference between the two main types of Iberian ham: there is Jamón Ibérico, from pigs who are acorn and grain or just grain fed, and then there is Jamón Ibérico de Bellota, or acorn fed – they live free and have access to as many acorns they want. As an indication of the difference between these Iberian hams, the Iberian Bellota ham can cost twice as much as a normal Iberian ham.

The farming of these Bellota ham pigs is just as important for the texture and flavour of the ham. They are allowed to roam free in pasture and oak groves (dehesa) where they feed naturally on mostly acorns, but also grass, herbs and roots. This, combined with the exercise the pigs get while searching for food, ensures that they fatten at a slower rate and allows fat to accumulate even more between their muscle fibers – as a guideline, a good Iberian ham has regular marbling (flecks of intramuscular fat).  So all this running around feasting, especially during the acorn season, does more than make for a well rounded, happy pig whose exquisitely marbled raw material is packed with natural antioxidants – a key ingredient for extended curing of the ham for a minimum of 24 months. 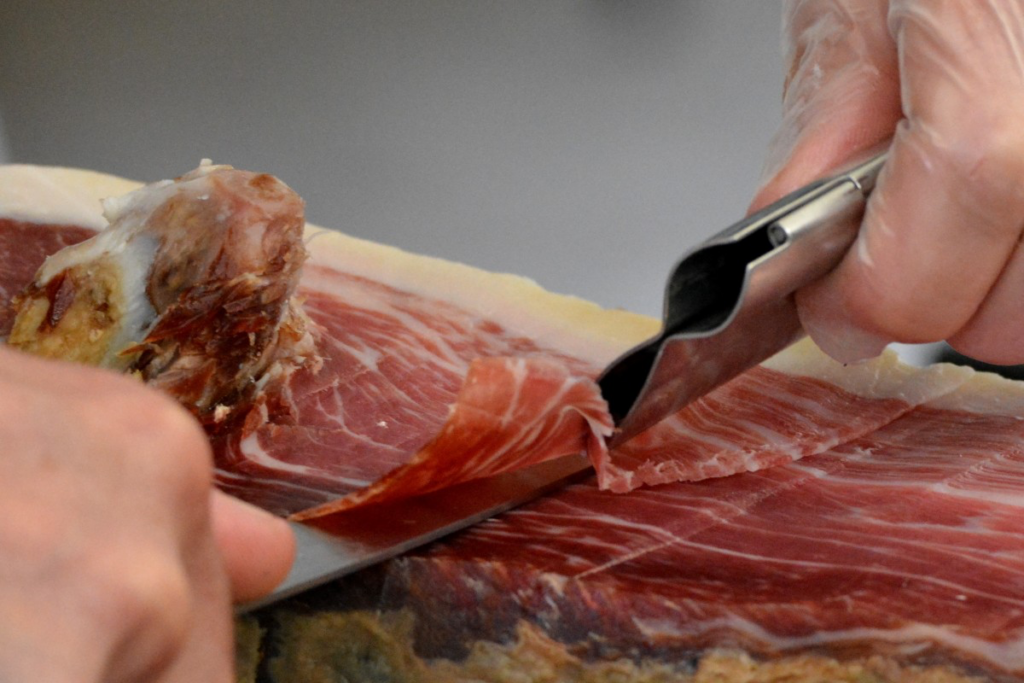 There is an elaborate process involved in curing the ham over such a long period, sometimes up to 4 years. The hams loose nearly half their weight as the fat drips away and from winter to summer the salted ham starts to sweat. Because of the salt, bacteria cannot take hold, but massive chemical changes occur and these cycles continue through the seasons with periods of heating and cooling, salting and drying, breaking down the fats with as a result a most flavoursome, silky textured ham.

And because of the antioxidants in the acorns and the unique curing process, the saturated fats are changed into healthy mono-unsaturated fats high in oleic acid. So apart from the obvious enjoyment of eating this exquisite ham, you also reap the health benefits, as oleic acid is an oil which is also found in olive oil. It aids in reducing cholesterol levels and cardiovascular risk and is a fantastic source of vitamins, minerals and natural anti-oxidants.

The ultimate result is long and relatively slender leg of ham with a golden coloured fat. The meat is intense dark red, and brightly marbled. Expertly sliced in small, thin pieces that melt in your mouth, this sweet, nutty, soft and juicy, with all the flavours of Spain’s noble black-hoofed Ibérico pig and the country’s rich dehesa oak pastures, is almost too complex to explain in words; I believe you will just have to try it for yourself.